“The Texas Longhorn made more history than any other breed of cattle the civilized world has known.”
– J. Frank Dobie in “The Longhorns.”
First imported to the new world by Spanish settlers in the 1500’s, cattle now known as the Texas Longhorn freely roamed the state in staggering numbers by 1850. Between 1866 and 1890, some ten million cattle were driven from Texas to railheads in the north in what came to be known as the great Texas cattle drives.
Today, fewer than 3000 direct descendants of the original cattle remain. Bar V Ranch is a refuge for a small herd of these originals. We belong to the CTLR and participate in DNA and visual inspection. CTLR is the smallest longhorn association in Texas and it is the only group dedicated to preserving the breed. 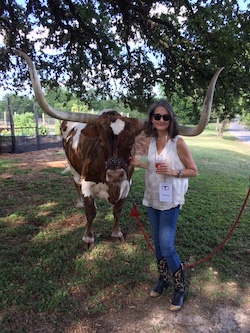